The Verse of Arieg
(Main Page) 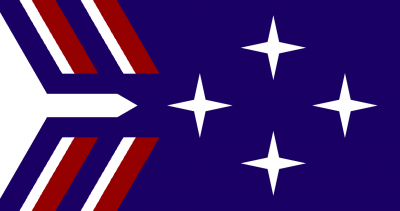 The Anglo American Union of Systems or in shorthand simply known as the 'Union' is a collection of colony worlds who's population is derived from a former Sol system socio-economic bloc. A bloc who's core was based in the Americas but counted the former English commonwealths under its membership. As a result these cultures and peoples have carried over both language and their old cultural customs to the Sundala Starzone to form the AAU.

Techonlogically and socially it sits as the middle ground between the socialistic and state controlled mass of the Progressive Eurasian Colonies and the technocratic/corporate extreme of the East-Asian Conglom Alignment. One where democratic controls are still in play but the pursuit of profit is ever a motivation for its population.

Due to the interstellar nature of the AAU it employs a three tier governmental system starting at the individual planet or habitat level and ending at the federal or multi-system level.

President of the Colonies

Judiciary Council of the Colonies

It is the 'middle child' of the various human powers in the Sundala Starzone with a balancing the interests of its corporate entities with that of the steady and healthy growth of its society without taking the extreme measure in either direction. As a result it tends to be the middling power when it comes to population sizes, military strength, and technological development. Like the other human powers it controls a portion of the Marii's gate network with a total of four of these systems under its control, additionally numerous human crafted gates have branched off this network in an effort to colonize the space surrounding both the Anglo and American arms.