The name for all the various small clan and tribal armies that make up the united dumaurian territories outside of the Royal Army and the Rangers. Usually separate entities each looking out for their individual groups they unite and for the 'Ba'Heed' when an outside threat appears that is beyond the means of the Royal Army or Rangers to combat.

The main and basic division of the Dumauri, there are a total of five main tribal entities whom descend from the armies of the past that invaded the region at the behest of the ancient elven empire. They each control a general area of the tribal territories, the borders changing and flexing as the eternal low intensity rivalries between tribes and clans continue to burn.

The Capital City of Orisia 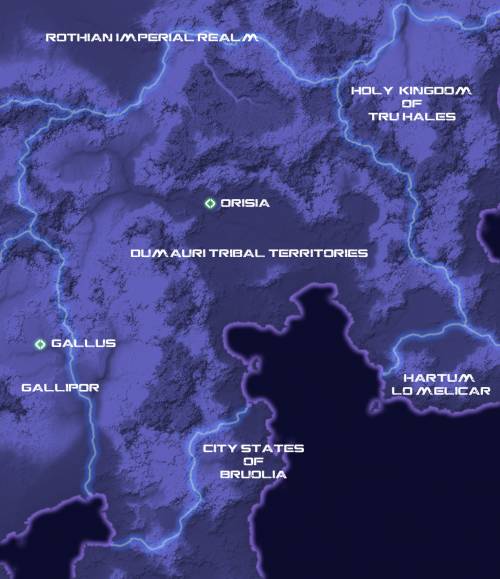 The Dumauri Kingdom is a tribal kingdom which is kin- and hegemony-based. Most tribes are sedentary and nomadic based on seasons and their territory which may change due to the outcome of a tribal war. The rules of tribal war have been set to ensure the least number of necessary loses yet enough to keep population explosion under control. These rules are considered sacred to certain extend in Dumauri life. Tribal war may only be initiated with adjacent tribes where the battlefields has been determined and designated in the Tribal Blood Fields. These are sites of mediocre fertile land or worse where the blood spilled and the dead may one day turn it more fertile. The assignment of these fields is controlled by the royal court in conjunction with the council of tribal chiefs. Changes happened rarely, mostly only when the kingdom gained or lost territory. Each battle may only commence in the presence of referees consisting of retired chiefs and representatives of the court.

The referee company and entourage usually set a visible camp near the field. They would have their flag raised as a sign. Aside from observing, evaluating and recognizing the outcome of battle the group is also tasked with administrative work relating to the kingdom. They control taxation and preside over intertribal judicial matters. The outcome of battle may result in a transfer of land to the winning tribe. This is then registered in the Tribal Torrens. The transfer is only valid after completion of harvest and before seeding. As a result most warfare occurs after harvest.

The Dumauri Kingdom controls the second most important trade route between the center and southern part of the continent as well as the second most important route to the east of the continent. Despite their relatively cheap toll the Dumauri's toll revenue is substantial. Due to historic reasons outside military or paramilitary like mercenaries are generally not allowed passage. They may escort traders to border towns and reside there but no further unless approved by authorities. Therefore, Dumauri mercenaries provide exclusive escort through Dumauri territory at a price. This has disgruntled some mercenary guilds.

Virtually all Dumauri warriors all over the kingdom at some point join in as an escort for the purpose of mating, much to the delight of travelers and traders. This has contributed to much of the trade traffic through their kingdom, especially with southerners and adventurers.

The Dumauri maintain a diverse animal (goat, cows etc.)and farming agriculture. However, due to their heavy leaning towards warrior raising most of their manpower is provided by younglings, retired warriors, serfes and (war) slaves. Although, very rare they also produce one of the finest weapons and agriculture utilities. These are made from a high quality metal block imported from the east and forged in an extreme heating process not possible or known to anyone else for millenias to come other than the Dumauri and the Elves. These are virtually not obtainable by outsiders.

The Dumauri Kingdom is highly valued by the Kingdom of Gallipor, United City-States of Bruolia, Hartum'lo Melicar and Hartum'lo Pelshys as a buffer against Rothian rule. These nations are among the most outspoken against the Rothian Empire.

The Eathian Reach has a relatively larger mercenary demographic than other southern nations. Having the two most important trade routes just beyond its borders yet not in its grasps has somewhat hurt its relation with its neighbors including the Dumauri.

The Holy Kingdom of Tru'hales has virtually no direct trade relationship with the Dumauri. The Holy Kingdom sees the Dumauri as a cruel, violent and debauched race that should be purged. Its citizens are regularly indoctrinated against the Dumauri and on occasions are more vocal than its own leaders. However, the mountain range between them, internal and external affairs has kept the kingdom from attempting any military actions.

The elf nations have little interest in the Dumauri other than trading with the rest of the continent.

The Dumauri Kingdoms relationship with the Rothian Empire is delicate and only stopped by the mountain ranges and the warrior prowess of the Dumauri. At every opportunity the Rothian Empire has criticized and demanded direct passage and their own “security” through the southern passage. It is unclear how many times the Empire has attempted to send spies through the border fortifications but it's certainly not little. The Dumauri had kept a strong but ignorant stand toward the Empire.

As the Dumauri Kingdom is keeping virtually no relationship with other nations beyond its neighbors these nation have little to no regards to Dumauri interest. As such Dumauri who live and work in these nations have no protection whatsoever. And the only people they can rely on are themselves, their friends and kin. Most enslaved Dumauri were snatched in these parts of the continent.

The Dumauri Kingdom is made up of 10 clans originally descended from the armies of the past. Each originally was made up of 100-500 tribes. In time the number has dwindled due to tribal and other wars. It's believed there are about 3700 tribes in existence.

In times of war the kingdom can muster 3 millions warriors, including retirees. However, it takes 82-210 days to gather the troops and another 50 days of post riders relaying (one-way) messages.

The main means of communication is by a network of relay stations which provide food, shelter and spare horses for army messengers and commercial post riders. This supply point route messenger system is mainly along the three trade route through the empire. Military outposts also serve as such for the rest of the kingdom's official businesses. Due to the size of the kingdom a message takes at least 50 days if not longer (up to 200 days for postal services) from one end to the other. The borders are strewn with 2 men guard posts with fire and smoke towers which also serve as shelter. Depending on the region signal visibility can be as low as 10 km and as far as 42 km (mountain). This system still requires about 6-7 days to reach the capital (center). There is rumor about existing magic communication devices.

As males are rare among the Dumauri the children have to go through a spartan test to see if they are fit for the military. Only the very best are allowed to pursuit a military carreer which is mostly with the army rather than the perilous tribes or ranger forces. Their status allows them to visit tribes for procreation. Those that don't pass are moved toward a working profession. The Dumauri don't have much of specially skilled professions like architects. Therefore, the Kingdom has been making efforts to fill these jobs with males. As a result many feel needed in their role and less resentful of their sheltered life.

Females on the other hand don't have much choices than become house builders, field worker, or any other type of manual labor. In time some have become creative and inspired while dealing with foreign traders and travelers. They built the guilds now in existence in the kingdom: trader, mercenary, assassin, etc. Not all of these establishments are well looked upon by the general public. In time these guilds led to the founding of towns and cities within the Kingdom, including some of the large border castletowns. Some of the traders are selling the belongings of fallen warriors from poor tribes in the tribal wars. This practice is frowned upon and despised by some but it generates vital revenue for the tribes.

Aside from these peddlers, songstress, dancers, actors etc. aren't considered respectable professions among the Dumauri despite their popularity with others.

Hunters of the Blood is an order tasked with dealing with rogue dumauri going berserk or committing crime that can't be dealt with local authorities. Once in a while a dumauri (1:10000) with excessive aggression and low self control is born. If such a person goes berserk the only means to stop him/her is by death. They usually leave a trail of blood, hence, the order's name.

- Written by Lafiel on the Realm of Eideon discord server.