Territories and Strategic Holdings of the Colonial Pact Trade Alliance 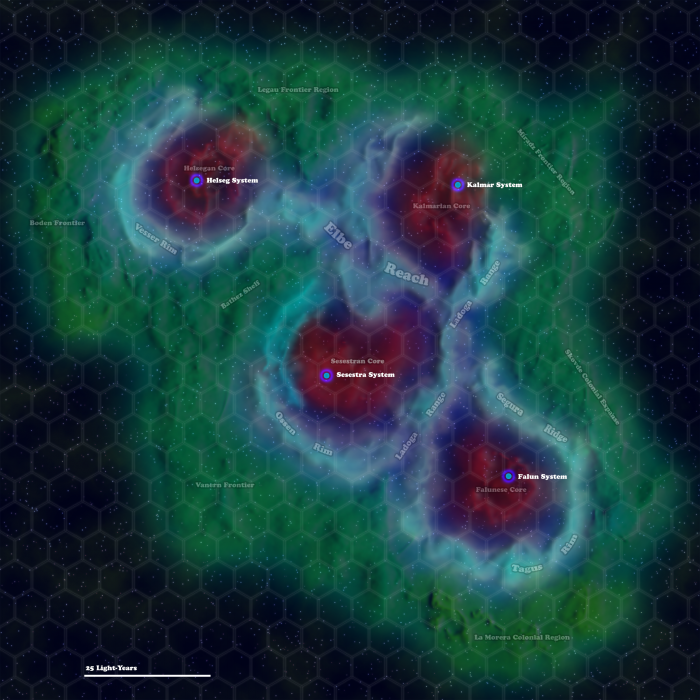 The 'core' systems of the Colonial Pact Trade Alliance, these are the most built up and typically the most densely populated due to be inhabited the longest (nearly a millennia) and being the respective 'core' of each Colonial Pact participants power structure, industry, and cultural/political influence.

Known as the 'inner ring' or 'inner halo' of the Pact, these are second generation colonies started by the various founding cultures of the colonial pact and are a few centuries old on average as they spread from the initial points of arrival for their respective colony ships. Like the core systems these are heavily developed due to the amount of time humanity has spent on them, developing their resources and building up their infrastructure. Often times these colonies will be the major concentration of industry due to most of the core worlds having been 'tapped' for most of their easily extracted resources.

The outer ring of colonies and worlds of varying population density, infrastructure, and development, with most star systems having seen less then a century or two of habitation. These are some of the youngest colonies that have established themselves as fully recognized entities, some are part of the four main power structures of the Colonial Pact while others are fully independent states that have integrated themselves into the treaty and trade obligations of the Colonial Pact.

Known as 'The Rim' or 'The Colonial Frontier Zone', it is a swath of star systems surrounding the expansive pattern of the main colonial pact power's and their established empires. These systems hold to all kinds of flags and powers, from singular empires in microcosm to corporate charter operations law and order out here is often by the power one holds in their hand.