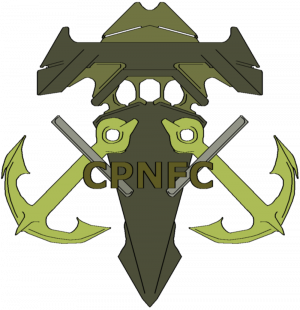 The Colonial Pact Naval Forces Command falls under the purview of the Colonial Pact's federal government, specifically under the combined Colonial Pact Federal Treaty Forces with the United Colonial Executive President acting as its commander and chief. An appointed post, the Secretary of Defense acts as its primary day to day civilian command element. Due to its federal nature the CPNFC is the better funded of the two uniformed naval forces of the Pact, however it is smaller when compared to its territorial counterpart the Colonial Self Defense Naval Forces. It primarily serves as a defensive force for internal matters, insuring the open passage of goods between star systems and acting as an insurer of peace when disputes break out between member states. Acting as a deterrent against unprovoked military in-fighting among the various star systems. Its other role is to serve as the primary defense against external threats, however it ranks can be swelled in these situations with the less well trained and funded Self Defense Naval Forces if an external threat attempts attack.

Relationships with other Service Branches